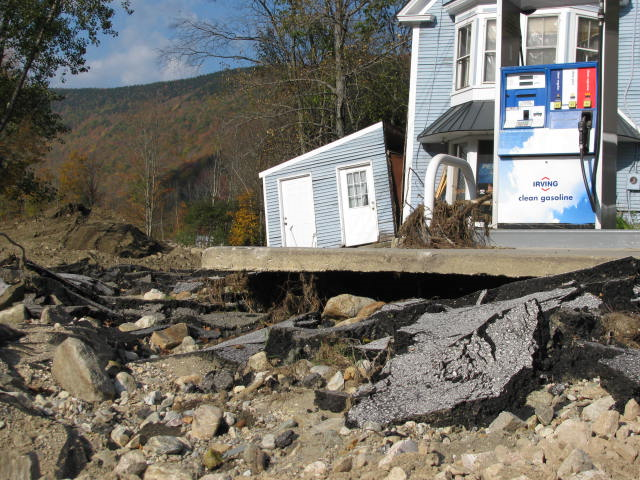 We were shocked and saddened by the flood of images we saw from the devastation that Hurricane Irene unleashed on one of our favorite areas, that between Killington and Queeche in Central Vermont.

Although we certainly felt for the people who had lost their homes and their livelihoods—not to speak of those who lost their lives—we must admit to a feeling of guilt over our selfish concern for our regular Vermont foliage/hiking/eating trip that we had scheduled for a mere month and a half after the floods. Our concern for the people, however, was at least partially allayed by learning that there were few casualties and that our friends’ home escaped unscathed.

Still, after seeing the pictures and reading and hearing reports of the degree of the damage, we were more than a bit skeptical of the area’s claims that it was making great progress and would be ready to accommodate the annual flood of Columbus Day weekend tourists that is so critical to the region’s economy.

When we arrived, we indeed saw signs of the devastation, scenes of structurally compromised buildings, upended cars, destroyed homes and a number of closed roads. A video and pictures of the flood and recovery at the Simon Pearce glass and pottery company, which overlooks the still beautiful, but badly damaged Queeche Bridge—an iconic symbol of the area–made the damage all the more real. 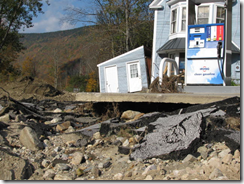 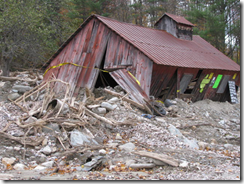 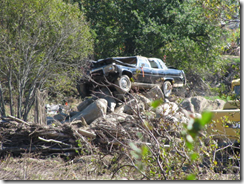 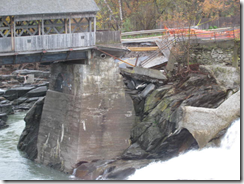 But, the magnitude and the speed of the recovery were even more impressive than the scale and scope of the damage wreaked by this force of nature. The vast majority of roads were repaired and opened (although signs of ongoing work were everywhere) and most homes and businesses had been cleaned up and were operating (albeit at somewhat diminished capacity).

Most Woodstock businesses, for example, were back in business within two weeks of the flood—less than a week after water service was restored to the community. Meanwhile, the Simon Pearce glass works, pottery and restaurant, which was near the epicenter of some of the worst damage, had reopened within 20 days (except for the bottom floor, which suffered the greatest damage) and was operating at near normal capacity during our visit.

The greatest financial damage, however, appears to have come from a reduction in the number of tourists that normally overwhelm the area during foliage season. Many restaurants that are normally filled were half empty and one merchant claimed that her and a number of neighboring businesses were down about 30 percent relative to typically Columbus Day weekends. She, however, felt lucky given that a friend (whose road Google erroneously reported to be closed) was down by 70 percent.

But, while we certainly feel sorry for the business people, a disruption to one’s business pales relative to the trauma faced by the dozens of families in the area who lost relatives or friends, whose homes, personal effects and memories were destroyed and who have been forced to live in hastily sited trailer camps and other temporary housing.

Our feelings, our sincerest best wishes and our congratulations (for their perseverance and the rapid recovery) go out to all the people from the Woodstock area and especially those who have been displaced by or lost loved ones to Irene.

But after all of this, we left Vermont with two particularly poignant images –images that portray the state’s indomitable spirit and resolve to recover. 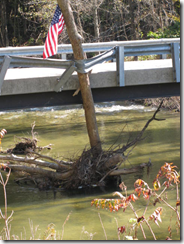 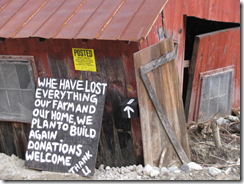