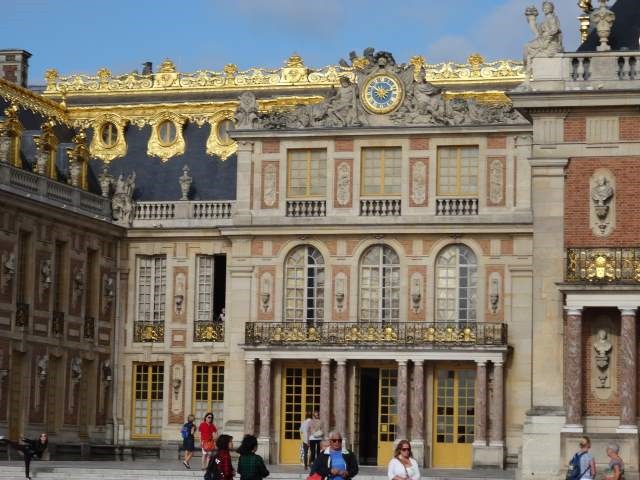 We visited Versailles eons ago (actually only 35 years ago) on one of our earlier trips to Paris. Although we remember a few of the highlights of this magnificent place (especially the King’s sumptuous public chambers, the Hall of Mirrors and the symmetrically-designed French gardens) we felt it was time for a return visit. And, since we knew that we missed a lot on our first self-guided visit, we decided that it was time to refresh our memories and to expand our understanding of both the facilities and the history behind them by taking a guided tour through the huge, elaborate, 20,000 acre estate. 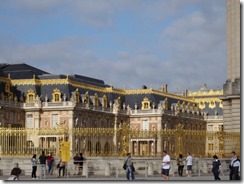 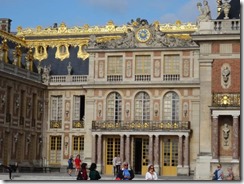 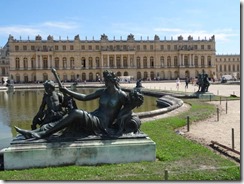 We chose a tour offered by City Wonders that promised a Full Day Versailles VIP “Behind Locked Doors” Tour (small groups of 15 or less people) that expanded beyond the normal public rooms and gardens tours to include conversations on the rumors and known facts of Kings Louis XIV, XV and XVI (the three kings who lived in in Versailles), Louis XV’s very public mistresses (Madame Pompadour and the notorious Madam duBarry), and Louis XVI’s Queen, Marie Antoinette. It also took us through the private apartments of Marie Antoinette and Madam duBarry, though some of the palace’s back and secret passageways as well as into Marie Antoinette’s private “rustic” refuge.

In the spirit of full disclosure, City Wonders provided us with complementary access to this tour. As always, however, our descriptions and assessments are totally objective.

We met our tour guide by a Paris metro station and walked to the nearby train station to board a train to Versailles. Once arriving, we took a short walk from the station to the palace. There, we waited briefly in a comfortable room for a Palace Guide (the only ones allowed to take visitors on tours of private apartments in Versailles) and her trusty assistant who managed the 8” long keys required to access these rooms. That guide, with assistance from Herve, our City Wonder’s guide, then walked us through the private rooms while giving us detailed stories about the rooms, the kings, the queens, the mistresses and some of the children of Versailles. 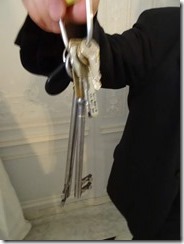 There’s no doubt that Versailles is a magnificent palace and well worth a visit. But seeing the rooms that are not open to the general public and learning about the stories behind the scenes took our tour to a totally different level. We started out learning how, in his youth, Louis XIV fell in love with the hunting lodge and its gardens in Versailles that Louis XIII built. When Louis XIV came to power, he built a three-wing “enveloppe” around the original royal hunting lodge to create the grand Versailles Palace well outside Paris as a means of keeping the aristocracy close to him and away from the corrupting influences that forced his father’s family out of the city. And of course, it had to be big enough to be a symbol of his power and to accommodate  the royal families and the 8,000-person retinues that lived in the palace to advise and assist the king.

Upon Louis XIV’s death, Louis XV, his grandson and only living male legitimate heir,  became king. He also lived at Versailles. And now the story becomes even more interesting as we learned about Louis XV’s most well-know mistress (Madame duBarry) and the interactions between her and Marie Antoinette, who would become the Queen of Louis XVI. We started out by entering the second-floor apartment of Madame duBarry.

Having mistresses was (and still seems to be based upon the exploits of the current president) very commonplace…and almost required…in France. Madame duBarry, succeeded Madame Pompadour as Louis XV’s official mistress (in addition to his having innumerable unofficial ones), had caused a scandal from the start. She had apparently slept her way to success almost from the day she was born as an illegitimate daughter of a seamstress. Once she progressed into being Louis XV’s mistress, she underwent a sham marriage to a court member (since all “official” mistresses to the king were supposed to be married in order to be presented to the court) and was then housed in a prominent, luxurious, large, multi-room Versailles apartment with a monthly allowance of what has been calculated as the equivalent of E1.5 million per month. And what an apartment it was as she employed her own agent to travel abroad and commission furniture and furnishings for it.

Although currently sparsely furnished (many of the items in the palace were sold at auction after the revolution), each room contained a few period antiques that were either recovered or were of the type that were likely to have been in them during her occupancy. She even commissioned her own china 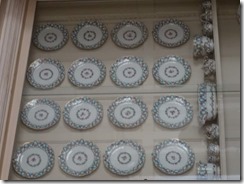 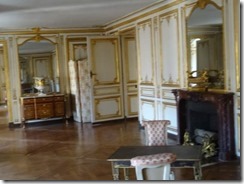 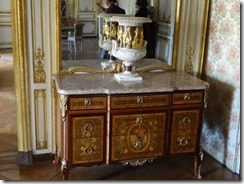 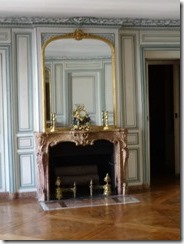 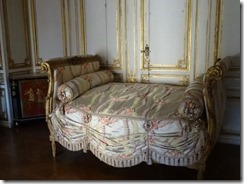 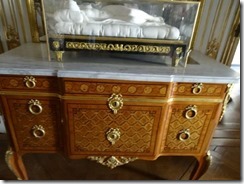 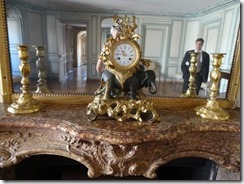 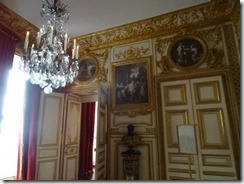 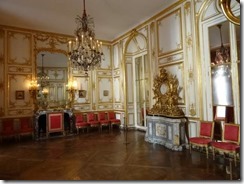 We then walked down back stairways and through the passageway that the King could use to visit her (kings visited the women’s chambers, rather than the women coming to him), and moved onto the private rooms of Marie Antoinette.

Marie Antoinette came to Versailles to marry Louis XVI at the age of 14—a marriage arrange to make the relations between Austria and France closer. However, she wouldn’t become Queen (nor he King) until Louis XV died. From the beginning of her life in Versailles, she developed a hatred of Madame duBarry. Remember, duBarry was an illegitimate daughter of a seamstress and Antoinette was a duchess. And duBarry had more power while Louis XV was alive. Once he died, Antoinette quickly moved duBarry out of Versailles, to a convent for a while. No surprise there!

Marie Antoinette started out in an apartment that had been of relatively “modest” size (somewhat larger than du Barry’s through). Once she became Queen, she demanded, and Louis XVI agreed to, give her ever more rooms and ever more luxurious furnishings. 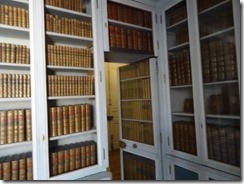 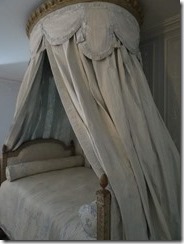 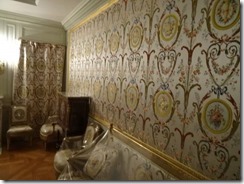 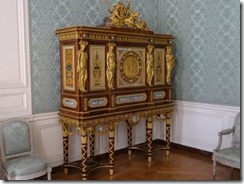 As a result, her private apartment was huge. While the room’s furnishings were also sparse today, a few of the actual pieces that belonged to her—including an incredible inlaid jewel chest—did provide a view of her tastes. So did the translucent, woven paper drapes that surrounded her bed and bath tub and the beautiful woven fabric wallpaper (reproduced by the original manufacturer, from the original design) that graced one of the refurbished rooms. Somewhat incongruously, the suite also contained a reproduction of the huge (7-k kilogram), notorious diamond necklace that in a convoluted plot, was reportedly stolen from du Barry’s suite (when she was supposed to have been visiting one of her other paramours), that, again allegedly, was offered to a woman who was thought to be Marie Antoinette, by a bishop anxious to curry the queen’s favor. The result, aside from some missing diamonds, was yet another court scandal and is sometimes cited as catalyst for the French Revolution (the French people thought she was spending too much money and was bankrupting France, when in reality, it was Louis XVI’s help in America’s flight for independence that was bankrupting France). 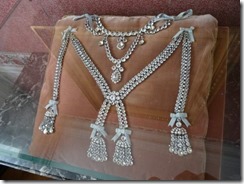 A Very Non-Private Place to Live

Then after these fascinating hours through these infrequently seen private chambers, we were escorted into the crowded public State Apartments. And public they were for more than just today’s tourists. They were accessible by virtually any member of the court who, according to our guide, “was wearing a wig and a sword”. And, virtually any member of the aristocracy who lived in or was admitted to Versailles could enter almost any room. This included the king and queen’s bed chambers, but seem to exclude a few other private areas where especially the Queen would go to escape.

Louis XIV, who loved and made very savvy use of public spectacle, used this public access to great effect—selectively granting preferred access to different members of the aristocracy as a means of encouraging the fight among themselves for access to him instead of plotting amongst themselves against what had become an all-powerful king. Louis XV and Louis XVI, by contrast, were much more private men who hated always being in public, but had no option but to abide by the long-standing precedents.

This led to some ludicrous situations in the most supposedly intimate of rooms. Consider, for example: 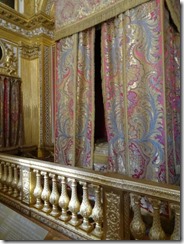 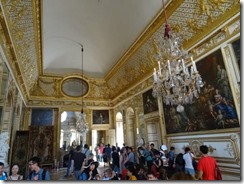 While these rooms gave one some insight into why we wouldn’t want to be royalty in those days, the rooms were beautiful, as were many other of the state rooms.

Among the other of the more interesting state rooms were the King and Queen’s throne rooms, the Council Room and the Napoleon Room, the latter of which had three walls covered by huge murals celebrating the Monarch’s coronation, victories and other glories. The coronation mural, which is a copy of the original (which is in the Louvre), was apparently repainted after Napoleon thought it would be presumptuous to show that he indeed crowned himself (believing that it was only he that had the stature to do so). It did, however, show him crowning his wife, as a means of humiliating the pope who was invited to the coronation, but who was not allowed to coronate the mighty Napoleon. 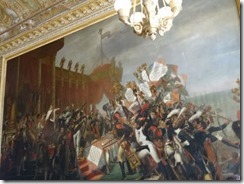 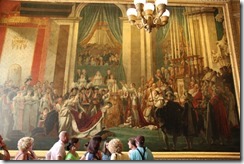 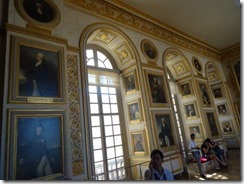 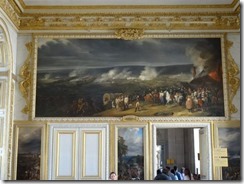 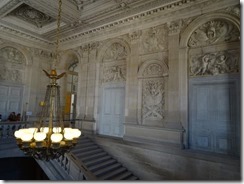 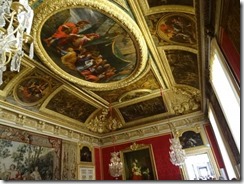 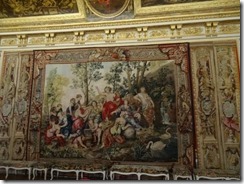 Then there was the grandest room of all, the amazing:

Hall of Mirrors. This extravagant, 72-meter-long ballroom was lined on one side by windows and on the other by 357 of the largest mirrors capable of being made—mirrors of which, at the time, were made only Venice and at price so high that even the tiniest of mirrors was considered to be a symbol of great wealth. However, Louis XIV bribed one of the artisians for the formula and was able to have the mirrors fabricated for this room. And as if this weren’t enough to highlight the grandeur of XIV and his court, he had the ceiling covered with murals which extolled his glorious victories, the size of his empire, his power and his role in bringing peace to Europe. The mirrors were surrounded by marble pilasters capped with gilded bronze symbols of royal power (including fleur de lys and rooster. 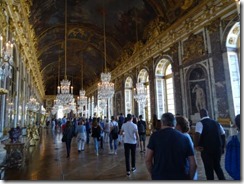 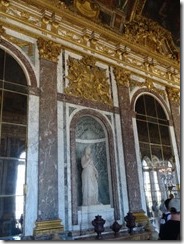 Before leaving the main buildings of Versailles to explore Versailles’ grounds, we had a lunch break. Although we had several choices of where to eat in Versailles, we decided to eat at the sit down Angelina Restaurant. There, we split a smoked salmon salad with avocado and a Croque Monsieur. Both were very good. And since Angelina is known primarily as a pastry shop, Tom forced himself to indulge in the sinfully rich and delicious vanilla Mille Feuille (yes, Joyce got a bite too). And since one of our fellow tour members joined us for lunch, we were also able to try a bite of her nice lemon tart. While the food was good and somewhat reasonably priced considering that one is a captive audience here, we were very surprised when we received the bill and discovered that our ice teas cost 9euros each. One little glass of tea cost more than the sandwich. We should have ordered wine instead, which was much less expensive.

In our next blog, we will explore the area outside of the main Versailles building: the beautiful gardens, Le Petit Trianon, Le Grand Trianon and the Normandie Village that Marie Antoinette build to get away from the very public Palace life.