Although the city suffered severe comeuppances in both world wars, it has recouped significant portions of its glamour and its prestige (if not its power) on the basis of its extensive post-war restorations, its economic strength and commitment to culture and style.

As usual, we began our exploration of Vienna with a walking tour, this one with Prime Tours and our guide Anita.

Our tour of the Central City began around Karlplatz, home of beautiful Karls church and the primary station for the city’s light-rail system. There, we received an overview of the city and its history.

Vienna began life as a Roman Empire military camp in the 1st century. In the 11th century, it grew into a major trading center. By the 12th century, it had become Austria’s capital. It erected its city walls by the year 1200 and rapidly became a prosperous trading center and one of the most important cities in the Holy Roman Empire. The emergence of the Habsburg rule was in 1278. By the mid-15th century, the city became the capital of the Holy Roman Empire. Habsburg’s authority grew rapidly to include much of central Europe by the mid-16th century.

While the Ottomans invaded the city shortly thereafter, a narrow escape led to a redoubling of the city’s defenses. A second siege followed the next century, leading to an Ottoman defeat. Vienna grew rapidly in wealth and power until the early 19th century when Napoleon gained control of the city. After Napoleon was eventually defeated, Vienna struggled to reassert its previous power and prestige, which it eventually regained by 1870. During WWI it suffered a financial collapse, which resulted in a massive strike and the end of Austria-Hungary and the emergence of Germany-Austria. Growing economic difficulties resulted in a radicalization of the populace in the 1920s, the civil war in the 1930s and Hitler annexed it to Germany in 1938—a development that the Austrian people welcomed. It came under Allied control in 1945 and in 1955, it became an independent nation.

While Austria suffered greatly from American bombing and the ultimate Soviet conquest, it recovered and rebuilt quickly. So much so that a study by Mercer International named it the most livable city in the world ten years in a row.

A Tour of Vienna Landmarks

Our tour of the largely Baroque city covered a lot of ground. Highlights included:

The tour was very good. It was fast-paced, except for inevitable waits for people to catch up (which did provide great opportunities for the rest of us to ask questions). Anita, our guide, was enthusiastic and a veritable fountain of historic information, which she was anxious to share.

Although the Prime tour certainly covered many sites, it could not possibly address all the city’s important sites in two hours. We continued exploring on our own tour. Among the primary sights we explored were: 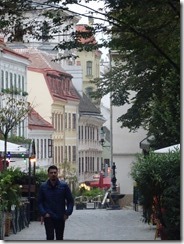 No trip to Vienna is complete without seeing the beautiful and graceful Lipizzaner Stallions. Although we did see them in their stalls and being marches across the plaza to the school for their exercises and lessons, we desperately wanted to see them in action. Unfortunately, we were not in town either of the two days in which they give performances. The school does, however, stage daily workout and training sessions, one of which we did attend.

The school, founded in 1572 to train horses and soldiers for infantry duty, has long since passed. It has, however, been retained to entertain guests and is one of the city’s primary attractions. We estimated about 500 paid attendees on the day of our visit.

The event is staged with riders in immaculate, tailored uniforms and the beautiful white stallions performing precisely (at least from our untrained eyes) as directed. Although the session we attended did not entail any of the carefully choreographed precision jumping or kicking maneuvers as in the performances, we did see five horses at a time, trot, prance, high-step and perform several precision steps, including prancing in place, on the rider’s command.

While it was not quite what we expected from programs we have seen or from the excerpts of videos we saw at the school’s entrance. It was, however, interesting nonetheless and worth just seeing the beautiful, precisely trained horses.

Albertina Museum is a Habsburg palace that was turned into a museum. It has retained and refurbished a number of the beautiful rooms, with exquisitely painted moldings, original and period artwork and furnishings and in some, reconstructed or in-process reconstructions of incredibly intricate and detailed parquet floors. Although the rooms were a bonus, we were there to see the museum’s huge collections.

Monet To Picasso provides the highlights of the museum’s collection (donated primarily by Swiss collector Herbert Batliner) of early 20th-century European art from Impressionism through Expressionism. Among the collection’s many, many highlights are:

Albrecht Durer is a 15th-to 16th–century Northern Renaissance artist whose technique, multiple styles and a huge volume of output we never properly appreciated. The 200+ works of this exhibition begin with his first pencil drawing, a self-portrait at the age of 13. It spans several decades of totally different subject matter (religious art to jewelry design and intimate portraits to grand landscapes), media (pencil, ink, engraving, woodcut prints, watercolors, oils) and styles. He painstakingly studied the geometry of his subjects, including precise measures of rations of his human and animal subjects.

His ink drawings, finished with watercolors, provide new perspectives on traditional subjects and some of his oil portraits almost make you feel that you know the subject, perhaps better than he knows himself. His empathy is evidenced in this Passions of Christ series and a landscape of Christian Roman soldiers who leap to their deaths, rather than renounce their faith. In dramatic contrast is the huge-scale 3×3.5-meter ink drawing of a triumphal arch he designed for Emperor Maximillian, his primary patron.

Arnault Rainer is an abstract contemporary artist who works across media, from oil to paint atop photographic self-portraits and canvas compositions he makes by hand. We particularly appreciated the imagery of some of his reworked photos and especially the seamless and evocative blending of complementary colors of a number of his canvases.

Maria Lassnig had a roughly eight-decade retrospective of a female painter with an intense focus on the inner sensations of her body (which she represents with color) and gender conflict and the subjugation of women (which she portrays in her imagery). This retrospective spanned her career from initial experimentations in the uses of color, through the highly traumatic death of her mother and her representations of her own feelings. Although we couldn’t really engage with much of her work, we found some of her self-portraits (as with men, with her recently deceased mother looking over her shoulder and the loaded choice she offers in my life or yours, to be highly engaging.

We, as we typically do, chose to eat at highly regarded local restaurants. The top three recommended by our concierge, and which we verified with our own research were:

Although we had reservations at the Arthotel ANA Amadeus, they were overbooked and moved us to Schosshotel Romischer Kaiser. We didn’t see any indication of AC and opened the windows which let a lot of noise into the room. The bed was very comfortable and firm. Each of us had a big pillow and a small pillow which worked well. Robes and slippers were provided and we had a ceramic pot to boil water in the room. The bathroom had a slight step up where we stubbed our toe until we remembered to step up.  The room was clean but did seem a little tired. However, that is the style of the room and the hotel. The walls are wood, which is part of the charm of an older building. The bathroom was pink with matching pink towels. It was comfortable and the location works. Breakfast was good and the location was perfect.