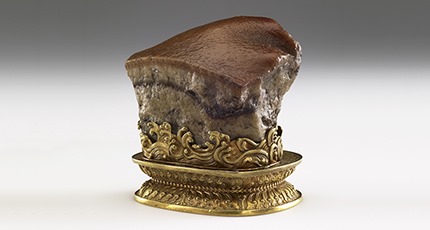 San Francisco’s Asian Art Museum for the Emperor’s Treasures exhibit was in town so we had to go explore it. This is a collection of masterpieces that were commissioned, owned by, and in some cases, even created by Chinese emperors and the royal families from the Song through the Qinq Dynasties.

These treasures, which are among the finest pieces of Chinese art in the world, belong to Taipei’s incredible National Palace Museum, which arguably has the best collection of Chinese antiquities in the world (even better than museums on the mainland). Although this collection is based largely on paintings and porcelains, it contains virtually all types of media, from calligraphy to jade carvings and even a couple of ceremonial bronze vessels.

Although the art in this exhibit certainly did represent the tastes of the Emperors, its significance went far beyond the royal household. The emperors, after all, were the primary social, political and cultural arbiters of the entire country. And in a few cases, they were also among the primary patrons and even artists (especially in calligraphy) of their eras. They identified the artists and styles that would be funded and encouraged. those royals and mandarins who wanted to demonstrate their own tastes and political legitimacy—or give gifts to the royal family–often commissioned and collected the same styles, often from the same artists.

Since photos were, unfortunately, not permitted in the galleries, it is impossible to even try to portray the delicacy and beauty of most of these works.

The three other galleries are all devoted to art created during the last of the Chinese Dynasties, the Qing, which lasted from 1644 – 1911 AD. This era, which was dominated by Manchu rulers, saw a great geographical expansion of the empire and an effort by the new rulers to assert their control over artistic styles in a way that remained consistent with Confucian ideals. It was, however, also an era of incredible experimentation and unprecedented excellence in Chinese art.

The court, especially under Emperor-artist Qianlong, became and even more powerful patron and helped guide a flourishing of technological and artistic experimentation, modernism, and an even greater convergence of styles. There was great demand for ceremonial objects and adornments, a rapidly growing export trade and growing influence by Jesuit missionaries and other foreigners. The Chinese, for example, increasingly adopted Western porcelain technologies and enameling and glazing techniques and incorporated these into traditional designs. Qianlong even commissioned at least one foreign artist to produce a large-scale painting in traditional Chinese styles. There was, meanwhile, also great progress in lacquerware, filigree and jade carvings.

The exhibition, especially the huge Qing Dynasty portion, contains a number of extraordinarily beautiful pieces that emphasize the mastery of many different artistic media and styles. After all these subtle and sublime artistic images, the exhibit ends with the greatest masterpiece of all—a slab of carved, banded jasper sculpture that is tribute to none other than a slab of pork belly! The sculptor uses the natural striations within the stone to create a super-realistic looking piece of meat, whose colored surface, covered with hundreds of tiny drilled holes, looks just like the soy-marinated pork rind it is intended to represent. And to demonstrate the symbolic importance of the famous dish, “donpo rou” to Chinese cuisine, he mounts it atop a solid gold base.