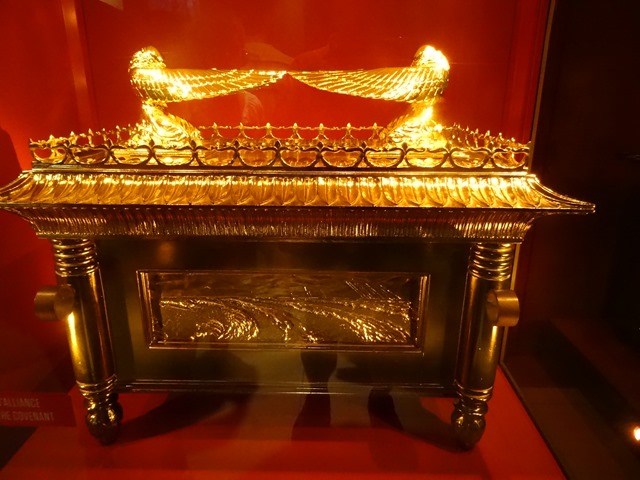 As with our return trips to most of our favorite cities, this trip focused on museums, walking tours (both guided and independent) and of course, restaurants. We devoted so much time to museums and visitor centers that we have divided these stops into two posts: One focused on art museums and on science and history museums.

National Geographic Museum. We were attracted by the promotional banner for the “Indiana Jones and the Adventure of Archaeology” exhibit. Although we didn’t know what to expect from this popularization of science, we knew that any National Geographic exhibit would be professional. We weren’t disappointed. Everyone was given a pad on which you input numbers corresponding to displays. The exhibit tied into all four movies in the franchise; playing clips, showing artifacts, explaining how special effects were done and providing trivial. That was the entertainment component. 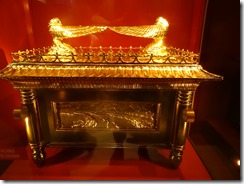 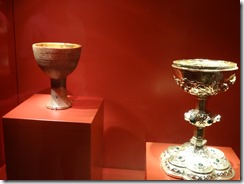 Education was multifaceted. It explained what parts of the movies were fiction and which were based on facts. It introduced real-life models for Indiana Jones (such as Sir William Wooley and Hiram Bingham), described actual archeological sites which were either used in or helped inspire the movies (Petra, Machu Picchu, Chitzen Itza, and so forth) and presented actual artifacts next to movie props. Most importantly, it briefly explained scientific archeological methodologies; showed the role state-of-the-art technologies play in current expeditions, and provocatively explored a number of outstanding questions and some of the many mysteries that remained to be solved. 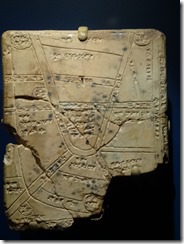 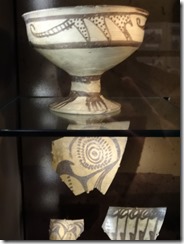 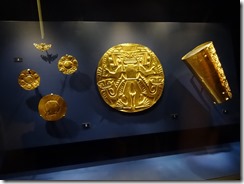 By doing all this, the exhibit not only provided an educational experience for adults, but also kept children engaged, and ideally inspired some to explore the science, as well as the myths of archeology.

“Monster Fish: In Search of the Last River Giants“, another NG exhibit, also provided a compelling the sand a combination of education and entertainment. The theme, supersize freshwater fish, provided information, life-size models and in some cases, videos of some of the largest freshwater river fish in the world–fish that continue to grow through their entire 100+ year livespans. These include more than 25 different species of Sturgeon (fish that can grow to more than 20 feet and 1,800 pounds), Paddlefish (7 feet and 220 pounds), Alligator Gar (up to 10 feet and 300 pounds), Murray Cod (5 feet, 250 pounds), Goonch (6.5 feet and 150 pounds). Then you get into the real giants such as the Amazon’s Pirarucu (15 feet and 450 pounds), the Mekong River’s Giant Barb (10 feet and 660 pounds) and the Australian sawfish (22 feet and over 1,500 pounds). 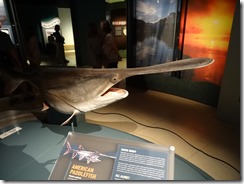 While some of these fish, such as paddlefish, are filter feeders and others, like the Pirarucu are bottom feeders, most are hunters, snapping up smaller fishes in their huge, powerful jaws. The sawfish goes even further, cutting some fish in half day with their aptly named saws and impaling others on the saw’s spikes. 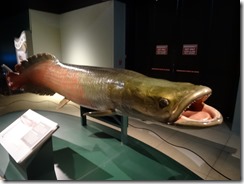 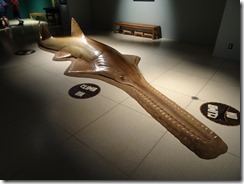 Although none of these fish have been known to kill people, all, as the exhibit’s dominant sub-theme makes clear, are endangered by humans. Although indigenous people rarely killed such fish (either because they didn’t kill animals, revered these creatures or could not preserve the meat), modern civilizations have few such compunctions. They are killed by overfishing (as for their meat or, especially in the case of sturgeon, for their eggs), pollution of their environments, or by damming or siphoning water from their rivers. Catching and killing fertile and egg-bearings females can des image future generations. Even if fish do survive, few can now have a chance to grow to full size before they are caught or killed by man.

And as was the case with the Indiana Jones exhibit, there is plenty to capture the imaginations no the attention of children. This begins with a short, child-themed introductory video to games and interactive learning devices scattered through the exhibit to aquariums with live juvenile fish.

Holocaust Museum. We have been through this incredibly poignant memoir to the Holocaust a couple times, a number of years ago. It was time to return, especially last year’s trips to Auschwitz and Birkenau. We naively thought we could just enter the museum as we had in the past, and we do other Smithsonian museums. Wrong! Daily assigned admission times are filled in the morning and only a few sections of the museum are open without having them. Daniel’s Story, about a Jewish boy’s passage from his home, to discrimination and exclusion from public facilities, into a ghetto and then a concentration camp is sensitively told.

Another gallery shows how Jewish persecution spread, from true believers, to collaborators who stood to gain from persecution, to police forces and bureaucrats in occupied countries who were drawn into assisting, to informers and people who stood to benefit from Jews’ misfortune, to those who just just felt they could not object. The exhibit showed how easy it was to go along, and how a few brave people refused to spot so. It forced everyone to ask themselves–just what would I do?

One other exhibit, open without timed admission was a small exhibit that portrayed the particular brutality that Pol Pot and the Khmer Rouge perpetrated against the Cambodian people, why we looked and read through this exhibit, we had recently. Been to Phnom Penh where we toured the high school in which many of these atrocities were perpetrated and the killing fields in which victims’ bone fragments are still being washed to the surface.

National Archives. We had been to the archives a couple times before, where we saw the highlights (the original U.S. founding documents: the Declaration of Independence, the Constitution and the Bill of Rights). Good thing, since there was more than an hour wait to view them on this trip. We did, however, see the Emancipation Proclamation, the amazingly preserved 900 year-old Magna Carta, and then scanned a number of exhibits. These included documents covering the civil and women’s rights eras, work conditions and immigration and Americanization; an overview of the huge range of records that are retained by the National Archives (and the challenges posed by digitization); and a special exhibit on America’s challenges in dealing with alcohol, from anti-drinking crusades, through Prohibition, to its ultimate repeal.

U.S. Capitol Visitor Center. We had time for a very brief tour of the exhibition hall on our way to an early dinner. The hall provides a scale model of and detailed description of the building and its dome and an overview of the history, the roles and the history of the U.S. Congress. One section of the exhibit provides an overview of the primary roles of the legislative body, including providing for the defense, the freedom, the education and the general welfare of the nation. Another explains the relative roles of the three branches of government and the rights and responsibilities of each of the two houses of Congress. The most detailed section lays out the history of Congress, with particular focus on the ways in which the two houses handled particularly difficult issues such as slavery, wars, depressions and abuses of power by members and presidents.