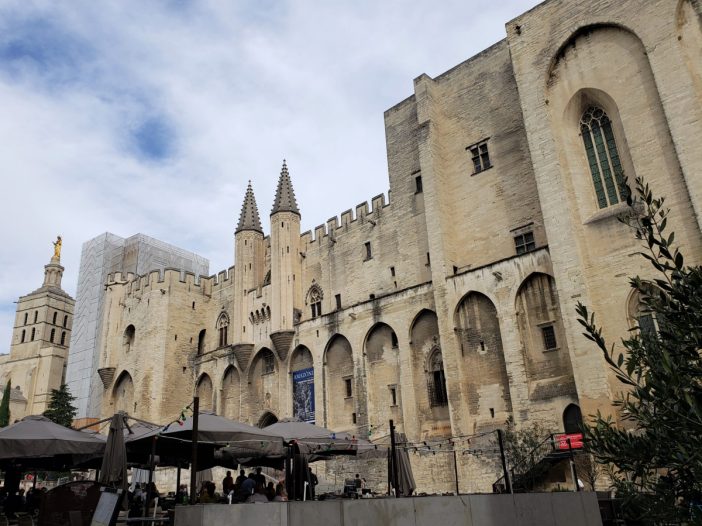 Avignon France is on the Rhone River’s southeastern part of the country. It is known as the gateway of Provence. Many visitors use Avignon solely as a base for exploring the area, but the town is extremely charming and deserves sufficient time to explore.

The Phocaeans initially founded Avignon France in 539 BC. In 120 BC, it fell under Roman control. In 43 BC, it became a Roman colony. While long prosperous, the city grew to prominence in 1309 when Pope Clement V, fearing the papal politics in Rome, moved the papal court to Avignon. He built and subsequent popes expanded upon:

The Beautiful Town of Avignon France

While the Palace of the Popes (Palais des Papes) is the city’s primary attraction, and the neighboring Châteauneuf du Pape region is one of the Valley’s premier wine-tasting regions, the city also has numerous other attractions.

Avignon’s streets are lined with 17th– and 18th-century houses, historic churches (especially the 12th-century romanesque Cathedral de Notre Dame des Doms d’Avignon and the 14th-century Gothic Eglise St-Didier), and a medieval bridge (Pont Saint-Bénézet). The bridge is the subject of a famous song of people dancing on it. However, as the bridge is very narrow, people probably danced under the bridge, not on it. Today, 4 arches and the Chapel of Saint Nicholas are all that remain of the once-stately bridge.

The particularly historic and pretty cobblestoned Rue des Teinturiers (Street of Dyers ). It is shaded with giant plane trees that run alongside a canal and was home to several textile mills from the 14th through the 17th centuries. These mills were powered by 23 paddle wheels that created the power for making silk fabric and for washing and drying Indian fabrics. Four of these wheels remain on the street today.

It is also home to several historic buildings, including the Gothic, 15th-century House of the IV of Cipher, the 14th-century Chapel of the Gray Penitents, and the 14th-century Bell Tower of the Cordeliers church.

The city, which radiates around Palais des Popes and the social and political hub of Place de l’Horologe (clock Tower Square) is home to the lovely City Hall (Hotel de Ville), a pretty, two-deck carousel, and dozens of cafes with hundreds of outside tables. It also has a number of museums displaying art ranging from Roman times through modern and contemporary periods.

The town’s famous clock is just outside the main square.

The town center, however, is dominated by the must-see huge Palais des Papes

In 1309, Pope Clement V took over a small Avignon Episcopal building and turned it into a heavily fortified papal palace. It was continually expanded through 1377 into a magnificent 48,000 sq ft complex by six subsequent popes and two unofficial “anti-popes” until the court returned to the Vatican. While all of the luxurious furnishings and art have been either moved, destroyed, or stolen, the incredible castle remains.

We took the self-guided audio/video tour through the complex. The tour explores the secure fortifications, one of the ten 150+-foot towers, some of the few remaining frescos, the Pope’s chambers (painted with murals representing birds flying from opened cages into nature which represent the freeing of the soul upon death), and his personal study (the Stag Room painted with hunting scenes).

While some of the painted murals have been restored, most have not. This, however, does not prevent visitors from seeing what these rooms looked like in their full glory. The interactive iPad guide uses augmented 3-D reality that reveals original designs, paint colors, and furnishings. One views them by clicking on a link and rotating the camera around the floors, walls, and ceilings. It was amazing to see what they must have looked like when in use. These include Consistory Hall (where the pope and cardinals met and where the pope received kings and other dignitaries), the Conclave Room (in which the cardinals were locked until they selected the next Pope), the huge Banquet Hall, the cathedral-sized Great Chapel (172×50 ft x 66 ft high) and the Great Audience Hall (which was used for formal papal events).

Other rooms display actual (versus virtual) sculptures, floor tiles and palace remnants and the gardens have been reproduced (from papal records) to suggest how they looked in papal times.

When we visited, two halls were devoted to a photography exhibit, “Amazonia” for which photographer Sebastião Salgado explored the Amazon region in Brazil for over seven years, photographing the forest, the rivers, the mountains, and the people who live there.

La Fourchette where we had one wonderful local main course, Avignon beef cheeks with flash-fried potato puffs and equally incredible local wine, a 2010 Chateau Mont-Redon Chateauneuf-du-Pape and one okay dish, roasted pork with garlic sauce, roasted garlic, green beans, and carrots. This was followed by a cheese plate where we liked, in descending order, local herb-coated goat, soft cow milk, and Fourne d’Albert blue cheese (with a dab of marmalade). Get to La Forchette for the incredible beef cheeks and 2010 Chateau Mont-Redon Chateauneuf-du-Pape while they last!

L’Agape, where we had two nice dishes for lunch: roasted lamb saddle with duck liver mouse, lamb sweetbreads, chickpea biscuits, and tonka bean sauce (like a combination of vanilla and cinnamon); and roasted seabass with candied zucchini, pepper cream, and chorizo. To accompany our meal, we had glasses of a 2020 red Rhone Domaine Clos des Patis Vintox and a 2021 white Provence blend, Ours Blanc from Luberon.

La Maison des Fondues. Given that 80 percent of Avignon restaurants were closed on Wednesday, the pickings were slim. And if we hadn’t run into this restaurant while exploring the city, we don’t know where we would have ended up. But fortune smiled upon us. The Savoy-style cheese fondue was quite good. The Bourgogne beef fondue for one was a huge serving. The beef was tasty but tough. Sauces included an interesting selection which, in declining order for our preferences are the Bourgogne, Roquefort, tartar, and onion. We had a bottle of 2021 Savoyard Apremont for the white wine and a glass of 2000 Vignerons des Roax Seguret Cote de Rhone Village to go with the beef.

We would be remiss if we didn’t mention the B&B in which we stayed: Le Clos Saluces. After parking at the underground parking below Le Palais des Popes, we walked through cobblestone streets to this beautiful B&B on a narrow street. Make sure you have directions ahead of time as the walking route is a bit of a maze. And if you are bringing a suitcase, ask about the best way to go without stairs. Or ask about driving to their door to drop off your suitcase before parking the car in the garage.

The hotel is run by 2 gentlemen who take pride and have rebuilt this old building into very comfortable lodging. Our room was bright and cheerful. You can enjoy the beautiful outside space in good weather. Our breakfast consisted of a delicious homemade cake, cheese, some meat, yogurt, and fruit. It is a delightful place to stay with excellent hosts. Hints: do not arrive in the city during rush hour as traffic is horrible.