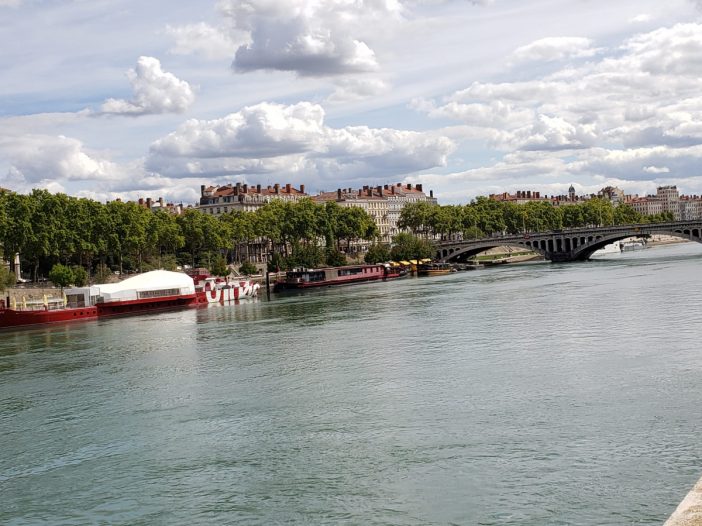 Lyon France is a UNESCO World Heritage Site that combines 2,000 years of history with newer areas. Its Old Town area is filled with cobblestone streets and restored buildings. Yet other areas showcase modern structures. Climb the steep stairs to Upper Old Town or wander through the city. You will find interesting areas to visit at every turn.

We spent our time in the central latitudes of the city—primarily within the V, with brief explorations on either side. Here are some of the sights we found most interesting.

Place de la Comedie an area that contains the Opera, the dramatic City Hall, and a purposely weathered disc that is one of a number of pieces of public art.

Lyons shopping city in the Middle Ages still retains its renaissance architecture. It is is a fun, busy street lined with pleasant cafes and restaurants.

Old Town Lyon and its 16th-century home of Renaissance-era, terracotta-tile roofed mansions were saved from the wrecking ball by Andre Malroux’s designation of the historic area as a “protected zone”. Today the streets of lower Old Town are lined with cafes, sweets shops, souvenir store,s and a handful of galleries. While nice, it is not as interesting as the historic areas of cities including Nice and Avignon.

Sure you can take transit or drive to upper old town but you can also climb up several steep flights of perhaps 400 steps (we lost count) that make our San Francisco stairs look like a kiddie zone. Atop the steps, are the terraces of Lyon Restaurant (which we unsuccessfully tried to book several months in advance only to discover that the restaurant was fully committed for the next three months!)

Beyond the Terraces is another steep climb to a large park with Greco-Roman ruins and Basilica Notre-Dame de Fourier. The Basilica is particularly pretty from afar at night

The Right Bank of the Rhone is home to the amazing Les Halles de Lyon Paul Bocuse Food Market. This popular gourmet market has several specialty restaurants and roughly 100 booths that offer everything from fresh seafood, meat, and fruit to lovely pastries, chocolates, and candied fruits. If you want fresh Brittany oysters, foie gras or truffles, and a bottle or two of wine for dinner, this is your spot. Lovely displays, great selections, and an inviting atmosphere. One warning: Come hungry, unless you have super-human willpower.

Although we came to East Lyon for the food market, our return walk was interrupted by cheering and blue flashing lights a block away. Always wanting to see what we are missing, we walked over to find an informal scooter riding contest with dozens of riders taking turns jumping their scooters onto a railing, riding it down to the bottom, and attempting to land safely. Although there were a few spills and bruises (although no need for an ambulance, most hit credible and safe, if not necessarily elegant landings. A few even attempted, and from what we saw, successfully executed 360s during their short runs.

At the southern base of the V where the Rhone and Saône Rivers converge is a museum of natural history, anthropology, society, and civilization that is housed in a fascinating deconstructivist -style building. Its collections span 5 centuries.

This large urban park is located at the northern corner of East Lyon. In addition to gardens, it has a free zoon. A trail along the bank of the Rhone takes you to Cite Internationale. This large Renzo Piano-designed development houses, among many facilities, the Convention Center, the Museum of Contemporary Art, a large amphitheater, hotels, housing pavilions, and several restaurants.

Chef Matthieu Girardon trained at his parent’s restaurant and a two-star Michelin restaurant. He won hopeful chef of the year at the Food and Wine Trophies organized by the Toques Blanches Lyonnaises. At his own restaurant, Burgundy by Matthieu, he is clearly angling for its first Michelin star. And we think he should get it.

The attractive, 216-seat dining room has a very attractively priced (starting at E60) multi-course “surprise” menu with sophisticated dishes, incredible sauces, and a service staff that is fully attuned to the desires and needs of the diners. As the restaurant’s name suggests, the food is well suited to the extensive, carefully crafted, and attractively priced Burgundy-intensive wine list.

We choose the three-course meal. But by the time you added in the amuse-bouche and multiple between-course treats, we felt like we had been eating non-stop for three hours–and all without feeling filled. His creations included catfish with béchamel cream, tomato tartlets with cheese sabayon, a mackerel dish which, when Joyce told our server she didn’t enjoy mackerel, was cheerfully replaced with char with bok choy in a shellfish sauce topped with crispy rice and a bowl of the most sinfully rich and delicious whipped potatoes we have ever had. Tom’s meat-oriented main was a perfectly-cooked pigeon breast with jus and with Lyonnaise-style potato. And then there was the delicious potato bread roll, the blackberry with black tea sorbet, and the Mirabelle (small sweet plum) brioche with red praline, chocolate, and toasted almonds.

From the wonderful wine list, we selected a 2015 Jean Lours Trapet Clos Prieur 1er Cru Gevrey Chambertin. It was as much a treat as the food and the service.

What a wonderful meal that was reasonably priced for the value we received.

This is a very popular bistro with very good food and very reasonable pricing. We shared three tasty dishes starting with avocado guacamole with Pastis flambéed prawns, orange, grapefruit and pepper crisps. Then came two classic Lyonnaise dishes. The main dish was a quenelle (something like a pike soufflé) with lobster sauce. For dessert, we had a praline tart with red praline (sweet, pink sugar-coated caramelized almonds). We added in a carafe of basic Macon-Village Chardonnay.

While recommended by the same concierge that suggested our first two restaurants, we left this restaurant disappointed. On the positive side, the restaurant had a very good, perfectly cooked seared foie gras (instead of the still good, but less wonderful foie gras terrine). But while we would have expected a sweet fruit-based sauce to go with it, all we got were cherry tomatoes and balls of cantaloupe. The other dishes were less impressive. Joyce settled for somewhat tasteless Albacore tuna with miso glaze and red pepper coulis after the restaurant just ran out of the St. Pierre fish she planned to order. Tom’s seared duck breast with carrot curry reduction was, like the tuna, perfectly cooked, but rather tasteless.  Our wine was a simple, but pleasant 2018 Saint-Romain Old Vine white Burgundy.