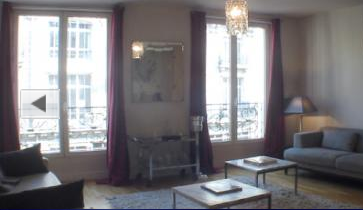 Tom and I were recently in Paris France..the city of lights, city of amour (love), fois gras, cheese, walking tours (to walk off the food), art, architecture, history….well, you name it and it has it.

Since we were in Paris for 5 nights, we decided to rent an apartment to get some additional space than a small hotel room provides. After some research, I came upon A la Carte Paris, read the both positive and negative reviews of using them, took a big breath and signed an agreement and prepaid (no refunds) for 5 nights in the 2d arrondissement at 157 rue Montmartre. They also had some places in other spots, including in our first choice, the Marais District (1st arrondissement ), but we booked too late. We paid about $310 per night. Many other companies offer apartments in Paris and after talking to other tourists, we learned that you can go cheaper, but you get cheaper if you know what I mean.

The location was great. It was within walking distance (at least for us), with the main attractions and neighborhood that we wanted to visit…The 2 Islands, Notre Dame, Petit Palais, Musee D’Orsey, Rodin Museum, and on and on. For those who don’t walk like us (we average about 20,000 steps a day when we travel, which is about 10 miles), the metro is easily accessed several blocks away.

The pre-arrival information gets a B+. The agency was very good at helping us find an appropriate apartment and one of the owners of our particular unit was prompt in interacting with us. My only criticism is that I asked for some help in getting dinner reservations. He told me he could help and did get us reservations of 2 of the 4 nights with places we requested, but I felt I had to push him to get it done. Maybe I am not being fair as he was always prompt in responding in general. We didn’t ask for any additional help pre-arrival.

Upon arrival: Although we communicated our train arrival time, when we reached the apartment after waiting in the taxi line for 20 minutes, another owner met us, explained that he was late for his next appointment and rushed through the apartment check off list (I only hoped we had the equipment he said we had). Yes, he gave us the information we needed, but it felt rushed. But hey, we know how to settle in. And he did carry one of the suitcases up the 3 flights (no elevator).

The unit itself gets a B+.The place itself was very comfortable. The 1 bedroom apartment, in a building built in 1850, had the comforts of a modern place. The place has a sufficiently sized, yet smallish, bedroom with a comfortable king size bed. The lights were only overhead (there really wasn’t a place for bedside lights), meaning that if someone wanted to sleep, the other person could only read with a flashlight (which I carry with me fortunately). The sliding mirror closet doors had way more than needed places for clothes. The bedroom had a TV with several English stations. Wifi and a local phone were included in the pricing. If you were crazy, it also had an iron and ironing board, something that my brother would have loved as he is the only person I know that irons anything.

The large living room had 2 large wonderful windows that opened up to the street. Great for air and to be in the midst of the crowd vicariously, but too noisy to leave open at night. The living had CDs and music too, but no TV (while true that we rarely watch TV, we were in one night wanted to get updated on the world).

A large dining room and its table served mainly as a spot to put everything down on when we went into the place. Now if we only had 8 friends.

The gallery kitchen had everything we might want…refrigerator, stove, microwave, coffee maker, hot water pot, dishwasher, utensils etc. It even had a rice cooker. OK. we’re in Paris. I’m not cooking. 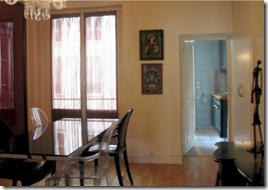 The bathroom had (gasp) washcloths and soap. Plus it had a nice rain shower, and plenty of soft towels. A washer/dryer were also very welcomed sights.

Yes, the floors squeaked, yes the upstairs neighbor sounded like an elephant stomping over our head, yes, there was city noise if you left the windows open. But it is Paris after all. Having lived in condos all of our adult lives, we understand all of that. But it may not be for everyone. But for these small issues, we had an incredible amount of space and would have given this place an A. But the lack of a hair dryer lowered the grade. Yes, we had a rice cooker but no inexpensive hair dryer. What is that about? Do I need 5 days of bad hair days? No. But you need to know to either bring one, or buy one and leave it for the next poor soul. I decided to go frizzy as I didn’t discover the issue until I was trying to go out the next morning.

We do plan to return to Paris in 2013 as this trip reminded us of how much we love the city. Will we contact A La Carte Paris again? Maybe. But we’ll try to book earlier and find a place with a hair dryer.