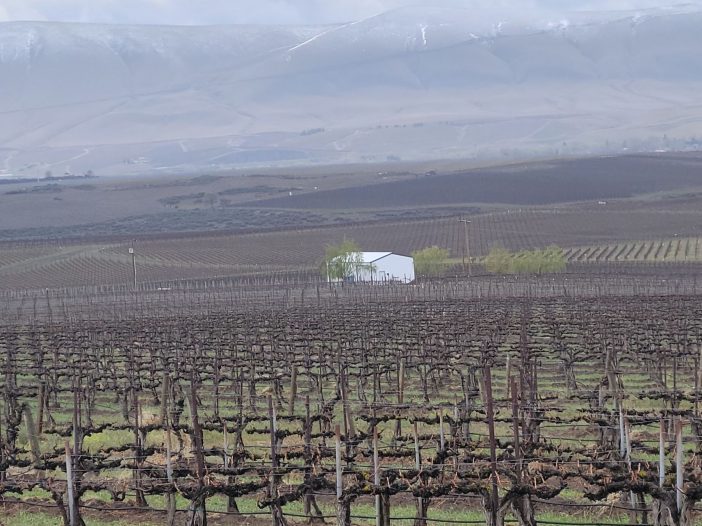 Although wine grapes have been grown here since 1869, they only accounted for a small percentage of the valley’s total agricultural production until about 20 years ago. Today it has almost 100 wineries and more than 18,000 acres of grapes grown on some of the state’s oldest vineyards. Its grapes account for almost half of the state’s total wine production growing a wide range of varietals, primarily Cabernet Sauvignon (which accounts for more than 60 percent of planted vines), Merlot, and Chardonnay. It also produces Riesling, Syrah, and others.

The Cascade Range which forms Yakima Valley’s western border creates a rain shadow that reduces the amount of rain the area receives to about 5-8 inches annually. Thus wineries need to provide some form of irritation.

But what it lacks in rain, it exudes in sunshine. It has about 300 days of sunshine a year, which is two more hours per day of sunshine than Napa Valley. Meanwhile, the Yakima River to the east helps moderate the heat. When the sun goes down, temperatures plummet. The resulting large “diurnal shit” preserves the acidity of the grapes and allows the vines to rest before another day of intense berry growth.

The valley, however, is large enough and its growing conditions are so diverse as to justify the sub-appellation (Yakima Valley is under the broader Columbia Valley AVA) being divided into several of its own individual sub-appellations (or sub-sub-appellations). Each has its own unique soils and weather patterns that are suited to different combinations of grape varieties and imparts different characters into its wines. The following sections discuss several of these sub-appellations.

Red Mountain is Washington State’s smallest and warmest grape-growing region. Grapes were first commercially planted here in 1975. The area was designated as a wine AVA in 2001. Today, grapes are planted on 57% of the 4,540 acres of the warm, dry 500-1,500 foot high mountain.

Soil is mostly gravelly, alkaline, sedimentary soil as a result of floods at the end of the last ice age. The area grows small grapes with high skin-to-juice ratios. This results in powerful, structured, tannic, but well-balanced reds.

One winery that we wish we had visited, but were unable to get to during its open hours was Terra Blanca, whose Cabernets, Merlots, Syrahs, and blends were highly recommended by two vintners. But this gives us yet another reason to return to Yakima Valley and to Red Mountain.

Located southeast of Yakima, the Rattlesnake Hills AVA was designated in 2006. It consists of a series of hills (dubbed “rattles”) of between 850 to 3000 feet. The AVA’s roughly 30 wineries have planted over 1,800 acres of vines along the hilltops and ridgelines which benefit from the hill’s cooler temperatures, breezes, and drainage.

Aligned around the small town of Zillah, it is still the home of many of the state’s fruit orchards, as well as some of its most prized vineyards. It is home to some of the valley’s and the state’s oldest vineyards. Even many of those premium wineries that do not have their own Rattlesnake Hills presence do offer Rattlesnake Hills and vineyard-designate wines—primarily Cabernet Sauvignon, Malbec, Merlot, and Syrah plus whites including Chardonnay and Riesling.

Our efforts to visit several Rattlesnake Hills wineries were, unfortunately, severely constrained by our uninformed decision to visit on a Sunday that happened to coincide with Easter! Several of the wineries that we hoped to visit were closed for the day. But we did manage to find a few open ones.

Two other stops provided an indication of the ways in which several other wines take to the Rattlesnake Hills terroir.

This AVA, in the southern corner of Yakima Valley, was supposedly named for the grasses that horses loved. Planted with grapes in 1972, the low-elevation (300-1,000 feet) region was designated as a separate AVA in 2005 and became the source of the state’s first three 100-point wines.

It is now home to more than 30 Yakima Valley wineries and has more than 10,000 acres under cultivation. Producing about one-quarter of the state’s grapes, it is especially known for its Cabernet Sauvignon (specifically Clone 8) and other Bordeaux varietals from which its wineries make many varietals and blends that are more similar to the wines of Bordeaux than they are to those of California.

While a number of the tasting rooms were unfortunately closed on the Easter Sunday we had unwittingly visited, we did still manage to taste the wares of several of the region’s wineries—a number of which grew or sourced grapes from nearby regions.

Although we also intended to sample the wines of VanArnam Vineyards, this too fell victim to an Easter Sunday closing,

Candy Mountain is the smallest (815 acres of which 110 are under vine) and the newest (2020) of Yakima Valley‘s AVAs. It was created by an upfolded ridge of volcanic basalt topped by a shallow layer of soil that stresses the vines and forces them to sink deep roots. The top layer soils are rich in minerals, with feldspars, iron, magnesium, and large chunks of calcium-caked gravel and calcium carbonate (called Caliche) that retains moisture and reduced the need for irrigation.

Known primarily for red varietals, only a few wineries currently grow fruit on the mountain and it is home to only one winery: Kitzke Cellars.

Although the area is best known for its Merlot, Cabernet Sauvignon, Chardonnay, Riesling, and Syrah, the city’s wineries appear to believe that anything can grow in the region. A chart prepared by the local wine bureau that maps each varietal by winery shows a total of more than 40 varietals including those from Portugal east to Austria and from northern Germany to southern Italy.

And for those who want to learn more about the state’s wine industry, it is now home to the Walter Clore Wine and Culinary Center.

While many of the wineries we hoped to visit were closed during our ill-planned Easter Day visit, we did taste at a few of the city’s wineries, especially some of those in the several square-block Vintners Village complex.

Other places we suggest you visit include Thurston Wolfe, Wit Cellars, Airfield Estates, and especially Coyote Canyon. Unfortunately, they were closed during our brief visit.

So much wine and so little time. We found some very nice wines in Yakami Valley but to fully explore the area, we needed more time than we had. And we needed to not visit on a holiday weekend. For example, we ended up tasting only one Chardonnay from Ancient Lakes AVA and were unable to stop at any wineries from Naches Heights, Snipes Mountain or the brand new Royal Slopes AVA. Nor did this trip bring us back to the Columbia River Gorge (although some Yakima wineries offer wines from Columbia River Valley. We did, however, visit several Columbia Valley wineries and taste its wines on another trip.

We hope to return again in the new future.