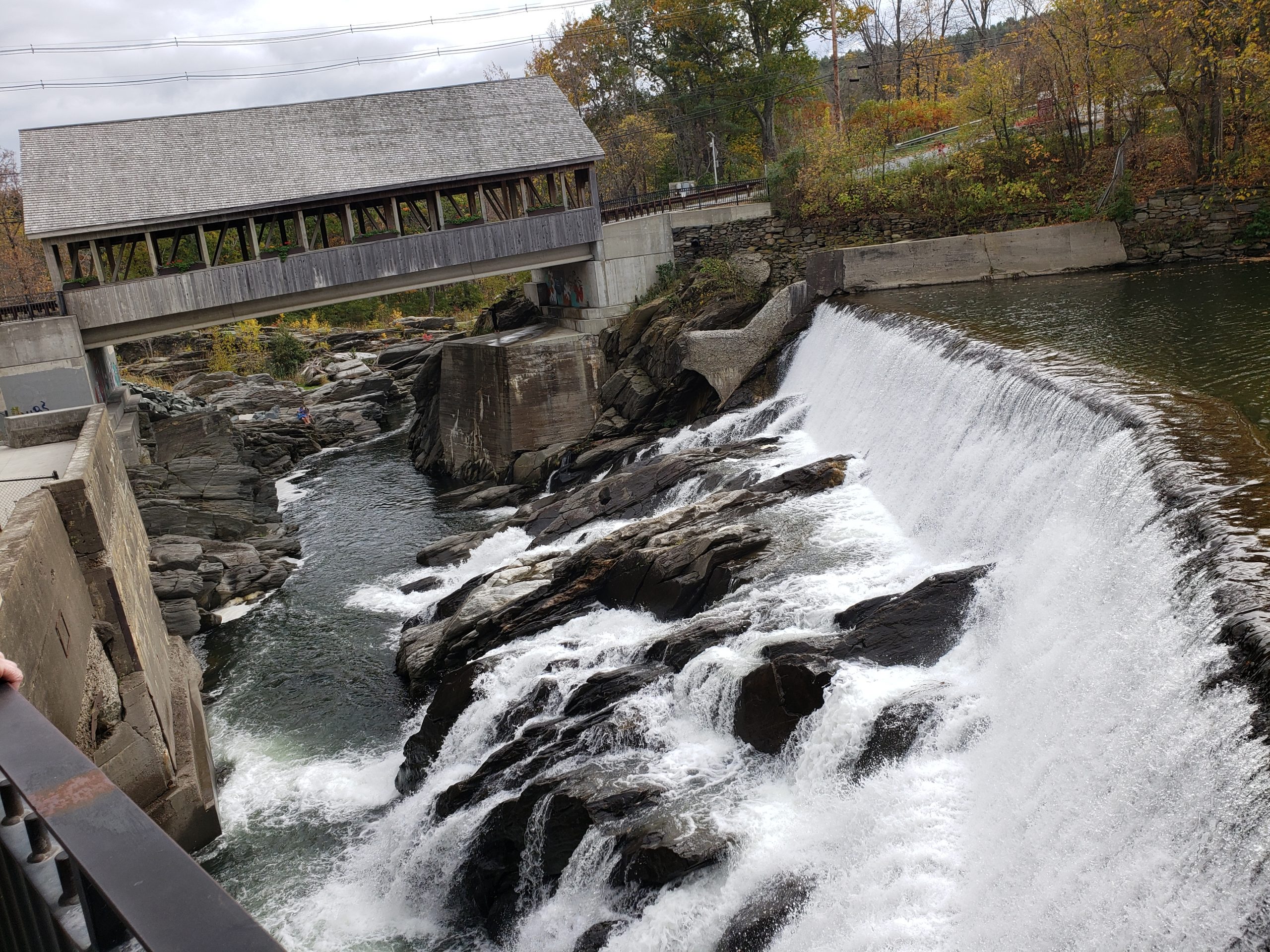 We have been to Woodstock Vermont many times as it is one of our favorite New England places to visit. As foodies, we always try to find the best places to eat. Unfortunately, some of our favorite restaurants are no longer in operation. But some continue to survive. Here are updated reviews of those that were still open during our 2021 trip (along with comments from past visits to the same restaurants). During prime tourist season, it is best to book a reservation in advance.

The Prince and Pauper

We have been eating here since our first visit in 1980. They have recently added additional space to the restaurant. While we prefer the cozy atmosphere of the bistro area or original dining room, the additional room certainly adds additional seating and still provides good food.

Our 2021 stop began with a disappointing seafood crepe that contained frozen lobster meat topped with Nantua sauce. Things picked up with a salad, seared jumbo shrimp with fennel risotto and vinaigrette and boneless rack of lamb wrapped in spinach, mushroom duxelles, and puff pastry with sauce bordelaise.

On a previous trip, we were very pleased with four of our five dishes. Tom liked his baby spinach and arugula salad with beets, goat cheese, candied pecans, and light sherry vinaigrette. Joyce’s house salad was fine, although boring by comparison. Tom’s roasted duck breast with corn cake and coleslaw was tasty after he removed the BBQ sauce which masked the delicate flavor of the duck. He also enjoyed his boneless rack of lamb prepared Wellington style (wrapped in spinach, duxelles, and puff pastry with bordelaise sauce). Joyce’s Maine crabcake entrée—with watery, frozen crab–was the only disappointment. Our 2015 Willamette Valley Pinot Noir from Domaine Drouhin complimented the meal.

In another previous trip, Tom had the three-course dinner, beginning with the country pate, a salad, and the chef’s specialty, three big, grilled boneless rack-of lamb slices, wrapped in mushroom duxelles and spinach and puff pastry and Sauce Bordelaise. It was served with whipped squash, potatoes Lyonnais with a toasted parmesan crust, and broccoli. And, since we sat in the bistro, rather than the main dining room, Joyce was able to order a single entrée—a roasted Korean glazed salmon fillet coated with black and white sesame seeds and served with a Korean barbecue sauce. All were delicious with a bottle of Chianti Classico.

This very small place in town is another place we enjoy. It specializes in seasonal small plates. In 2021, our two entrees were delicious: Faroe Island salmon with roasted cauliflower with tahini-lemon dressing, pomegranate, and everything bagel seasoning plus seared duck breast with coconut curry, butternut, and delicata squash. Our wine was a pleasant 2018 Winderlea Dundee Hills Vineyard Pinot Noir. The only disappointing note was an uncooked pumpkin cheesecake with rum caramel, walnut, and buckwheat crust. All, however, was made better with a glass of The Balvenie 14 year single malt.

On a previous trip, we began with a delicious roasted carrot dish served on a bed of carrot hummus with figs, and pomegranate seeds, and toasted quinoa for texture. We then enjoyed butter-poached lobster with autumn squash, coconut, hearts of palm, jalapeno jam, red onion, pumpkin seeds, and golden trout roe. Our friends enjoyed their interesting preparations of swordfish and bavette steak. The server recommended a Mosel Riesling (2016 Selback Incline Riesling to be precise) to complement the lobster and the swordfish. Our only disappointment came from a dessert that sounded very interesting, but which none of us found especially enticing: Homemade maple ice cream topped with caramel, pig fat, chicharrones, and peanuts.

Simon Pearce’s Restaurant is part of its glass-blowing studio and store in Quechee Vermont. We prefer stopping here for lunch over dinner (see below). It is even more pleasant when we score a window table overlooking the falls and covered bridge. And each time we go, we spend time browsing the glassware and go into the basement to watch them blow glass. 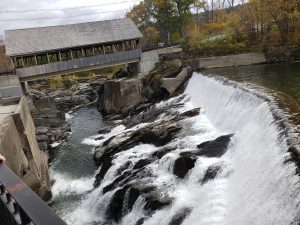 In 2021, we had a pretty good two-dish lunch of pan-roasted halibut with sesame whipped potato, sweet onions and miso butter sauce, and a lamb burger with aioli and baby spinach salad with red peppers and black olive vinaigrette. While Joyce had iced tea, Tom choose a Champlain Orchard Mac & Mac Hard Cider.

2018: We began with a pleasant small flatbread appetizer that was loaded with hen-of-the-woods mushrooms and roasted heirloom cherry tomatoes and topped with a balsamic drizzle. Our entrees were very good: grilled swordfish with pearl couscous, pickled fennel, and pomegranate vinaigrette, and seared Scottish salmon with sweet potato and cranberry hash, goat cheese and a maple-mustard cream sauce that was lovely with the salmon.

While we normally go here for lunch, we ended up going back for dinner on this trip. Dinner provides a broader menu, a large and well-planned wine list, and somewhat more complex preparations. But the darkness hides most of the view. We began with Vermont cheddar soup which was fine after we returned the bowl to be reheated. We then had two entrees.  The horseradish-crusted Atlantic cod was served on a bed of mashed potatoes and covered with a stack of crispy leeks. Its balsamic-shallot reduction, did little to enhance the dish’s taste. The seared Faroe Islands salmon was more interesting, with cauliflower, spinach, and chevre gratin and a very nice brown butter puree with aged balsamic, which nicely complemented the fish. We added a 2013 Shea Vineyard Pinot Noir from Raptor Ridge to the meal. While the salmon did redeem the other dishes, we had expected more from dinner and will stick to going here only for lunch.

2011: We began, as we often do, with the decadently rich and delicious squash bisque), followed by two enjoyable entrees, the grilled steelhead with butternut squash hash and apple-mustard sauce and sesame seared chicken with spicy apricot sauce, accompanied by glasses of Simon Pearce Sonoma Coast Pinot Noir.

Red Rooster at the Woodstock Inn

In 2021, the Woodstock Inn was only allowing registered guests into its dining rooms. However, we were able to find a seat at the bar and shared a lunch of very tasty cider-teamed Maine blue mussels with mustard, bacon, and garlic sourdough toast for dipping along with a comfort dish of a delicious apple-caramelized onion grilled Vermont cheddar cheese sandwich with a cup of unexpectedly bland tomato-pumpkin soup.

Dr. Coburn’s Tonic is a burger bar that replaced an old favorite of ours (Bentley’s). In 2021, we shared a lobster roll and a much less appetizing Portobello flatbread with mozzarella, portobello and oyster mushrooms, leeks, and truffle oil. While the meal was less than memorable, we did enjoy our 2019 Straight Shooter Willamette Valley Pinot Noir.

The Long Trail Brewing Company is a brewpub where we have stopped for lunch multiple times. In 2021, we shared a quick lunch of a cheddar cheeseburger with lettuce, tomato, and red onion with tasty sweet potato fries and a Citizen hard cider.

Our local friends recommended that we try Chef Brad’s Crazy Side Food Truck. You order from a truck in the parking lot, but then can either eat outside or go into a cute small building with inside seating. While the concept was appealing, the food was less than exciting. The lamb burger was dry, although the tzatziki sauce did help it. The mahi-mahi sandwich (with a tasty soy-mayo sauce) had such a thin slice of fish that we had to fold it in half to taste it inside the thick bun and with the lettuce, tomatoes, and red onion. On the positive side, the French fries were nice and crisp and the onion rings were thick, juicy, and nice and lightly fried. And, while Brad’s did offer fruit juices and sodas, people were free to bring their own beverages into the house. We brought in some fresh apple cider that we had purchased elsewhere and another table brought in a bottle of wine.

This Cambodian fusion restaurant is a small place that has dishes made with fresh ingredients.