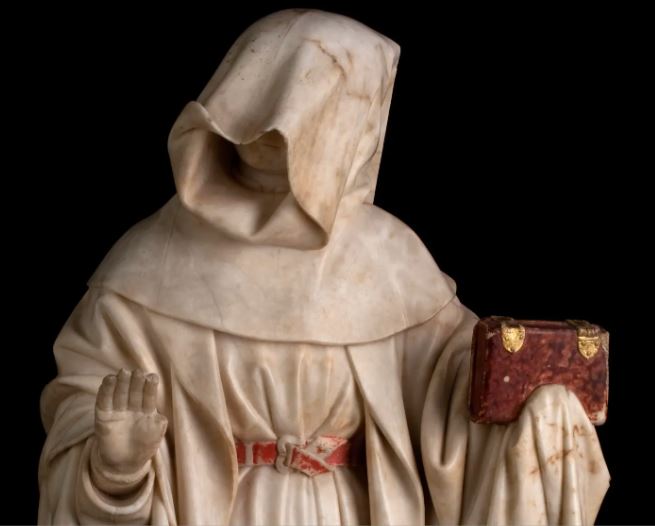 We have wanted to go to the San Francisco Legion of Honor since “The Mourners” exhibit first opened. Ever since we saw these magnificently carved alabaster sculptures at the New York Metropolitan Museum of Art last year, we were hooked.

The Mourners: Tomb Sculptures from the Court of Burgundy

This series of more than 70 sculptures, each of which is just over a foot tall, were carved to honor John the Fearless, Duke of Burgundy, who was assassinated in 1443. They depict sorrowful figures expressing their grief.

The Legion of Honor’s special exhibit displayed 37 of them from the collection of the Musée des Beaux-Arts de Dijon France.

The first thing you notice is the beauty of the pure white alabaster. Your attention, however, is soon diverted to the beautiful details: the folds of the mourners’ robes that envelop each of the mourners; the incredible detail and expressions on their faces; and the fact that every one of the sculptures included in the exhibit is all different.

Once you see them, you will not forget them.

But if you do make it to this exhibit, you also get three bonuses–access to the museum’s permanent collection and to two other special exhibits:

Another special exhibit contained Gian Lorenzo Bernini’s “The Medusa”. This Baroque masterpiece represents the transformation of a mythological woman. A vengeful goddess turned her hair into a nest of snakes. Worse still, anyone who looked at the woman was immediately turned to stone. One thing is for sure, the chunk of marble that Bernini transformed into Medusa is certainly more beautiful than the rocks that used to be the people who looked at her.

Camille Pissarro, one of the patriarchs of the French Impressionist painters, is best known for his landscapes. This exhibit focuses on his drawings, prints, and paintings of human subjects. But, while the subject matter may differ from those of his landscapes, the techniques, including his loose style and use of colors, remain the same. The exhibit also explains the role that Pissarro played in bridging the worlds of the formal French Salon and the upstart Impressionist movement and how his leftist political leanings led him to focus much of his energies on domestic and farm workers, rather than the bourgeoisie on whom many painters relied on to pay the bills.

Overall, a great one-two-three punch; and, when you combine it with a tour of the museum’s permanent collection, and perhaps a walk along the Land’s End Trail and a lunch at one of the Clement Street restaurants (Burma Superstar in our case), a wonderful way to spend a day.