Of course, food is a passion of ours in any city. we don’t leave any city without thinking of food. Food in Indonesia is so inexpensive that we often ordered many dished to taste things even if we couldn’t finish them.

Ledai Tiga Nyonya. We had a nice three-dish lunch here based on restaurant-highlighted dishes. We shared two appetizers: A perfectly done, fried calamari with very little grease and Ngohiang, which is minced chicken and shrimp, rolled in a tofu skin crepe. It looked nothing like the picture in the menu and didn’t live up to our expectations. Following the appetizers, we had a delicious fish: Ikon Bakar, which is a mild, flaky, white Becah Kulet fish (whatever that is), grilled in a slightly tangy Dabu-Dabu sauce (again, not a clue, but it was very good). The addition of a sweet and spicy soy sauce enhanced the already good flavor.

Sekar Kedhaton. We were told this was one of the best Indonesian restaurants in the city. Although it was certainly fine, we felt Ledai Toga Nyonga’s menu was more innovative and the preparations more sophisticated. And, unlike the Ledai Tiga Nynonya, which was near our hotel, we had to take a 30 minute cab ride to get here. That said, we did enjoy our dinner. Joyce was pleased with her fried rice with grilled prawn, chicken and shrimp crackers. Tom had grilled prawns with sambah matah sauce. The prawns were fine, but he really enjoyed enjoyed the zing provided by the sauce–a combination of chilies, shallots, lemongrass and shrimp paste. The service, was very personable and responsive (although the place was empty so few other customers were competing for the staff’s attention.)

Bale Bengong. A seafood restaurant on the outskirts of town, offers a selection of fresh fish and shellfish. Our tour guide was nice enough to stop here for our lunch after a hot day of temple sightseeing. We began with a grilled calamari appetizer with Dabu-Dabu sauce, followed by a grilled sea bass with a spicy, chili-based sauce. Both, along with the outdoor ambience were wonderful.

Jejamuran. An interesting restaurant that cultures, grows, sells at retail and cooks its own mushrooms at its restaurant. Every savory dish is mushroom-based and most of the drinks and deserts are built around fruit. We split a number of dishes: Mushroom soup (broth with fremella and enoki mushrooms and vegetables), mushroom satay, shiitakes wrapped in banana leaf, slowly coked mushrooms in coconut milk and spices and a Javanese curry with straw and crimini mushrooms. Tom drank a carioca slash, with carioca, papaya, sparkling water and syrup (in case you are wondering, the restaurant did not serve alcohol—yes, and we still ate here

) . Although some of the dishes were moderately interesting, Tom’s was the better of the items. The mushroom restaurant  concept, however, is both fascinating and memorable. And one of the best parts: the entire meal cost only about $8. This, however, does not count the $12 it cost for a taxi from the city center! 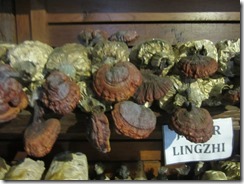 While In Yogyakarta, we spent two nights at the lovely, historic, The Phoenix Hotel. It was built in 1918 as the private home of a wealth Chinese spice merchant). While the hotel has its share of history, such as its occupation by the Japanese and its use as the Chinese consul residence, we took it at face value, with its spacious, well-appointed room, helpful staff, lovely courtyards and displays of Javanese and Chinese antiques. Since we rarely take pictures of food, we thought we’d post some pictures of the hotel instead. 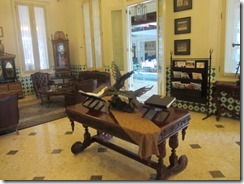