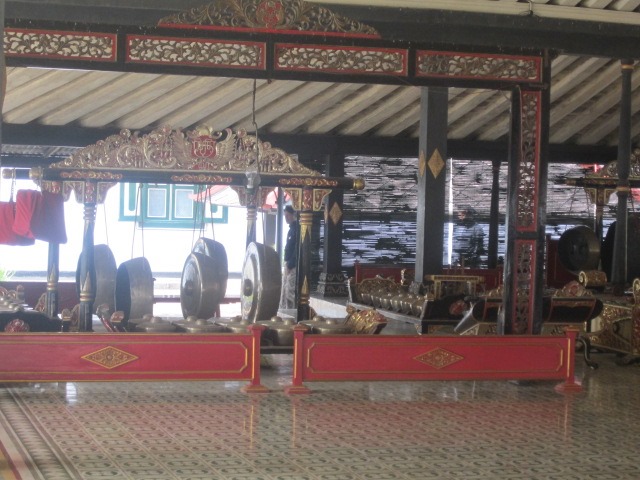 Yogykarta itself would not normally be on our itinerary. But since we had to go there to get to Borobudor, the most famous attraction on the island of Java, we stopped to see some of the sites. The two most interesting are:

Sultan’s Palace, which was built in 1756, has housed every generation of the Yogyakarta ruling dynasty. Although open everyday, one can only visit the ceremonial and public reception rooms plus a number of rooms that house memorabilia from each of sultans. 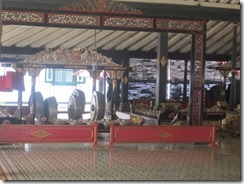 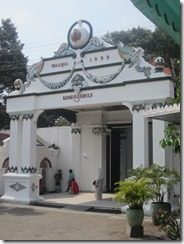 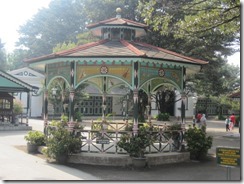 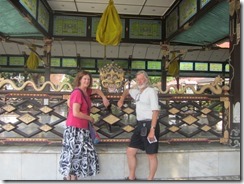 More interesting than the palace itself is the history of the family–and especially that of the 9th Sultan (the one before the current number 10). He, unlike other regional sultans, actively worked to win independence from the Dutch. He was rewarded by having he and his successors designated as the only one in the country in which the sultan (normally a symbolic title) is also the governor (the real ruler of the region) and the only one that is not subject to election. He also served in the first two post-independence regimes, as Economic Minister under President Sukarno and Vice President under Suharto. He was also distinguished by his benevolence, such as when he allowed families of the people who had worked in the pre-independence palace to house their families, their descendants and their businesses on a section of the palace’s grounds.

One of the most interesting things about the palace complex is the total lack of security. In a city where airport travelers go through two separate security checks and our hotel will not allow cars to enter the drive until their trunks are inspected, entry into the palace grounds requires no checks and no guards were visible. Guides tell you in which buildings the members of the royal family live and people are generally free to wander where they wish (but actual living quarters were off limits. Unless we were missing something, the sultan/governor appears to have a lot of faith in his people.

Water Castle, our second site,  was designed in 1758 for the first King by a Portuguese architect who integrated Indonesian and Portuguese styles. This palace, a adjunct to the Sultan’s Palace, was designed primarily around water–a large swimming pool, a sauna and a well at which the Sultan could commune with water gods. The palace also had a mosque in which the Sultan could pray and a number of aviaries to house birds that are symbolic of music and entertainment. And, since the Sultan was also a pragmatist, the palace had the head of a 27 km tunnel by which he and his family could escape from the city to the sea, in case the Dutch posed a direct threat. 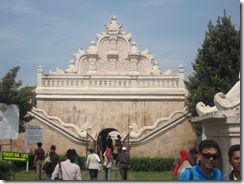 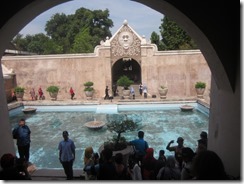 Our tour also took us to a few of the primary local craft workshops/galleries to allow us to see and learn how these famous Indonesian crafts are made and, of course, if we wanted, to purchase them. The crafts were:

The most interesting place in the city to wander is Malioboro Street. The street, lined with shops and stalls during the day, serves as the main commercial thoroughfare,with some food stalls on one side of the street. Then about 9:30 PM, the commercial establishments close and mats are laid out on both sides of the street, where people can us and eat all types of street food into the wee hours of the morning. Joyce, of course, nixed the week hours of the morning deal, and insisted on a normal bed time.