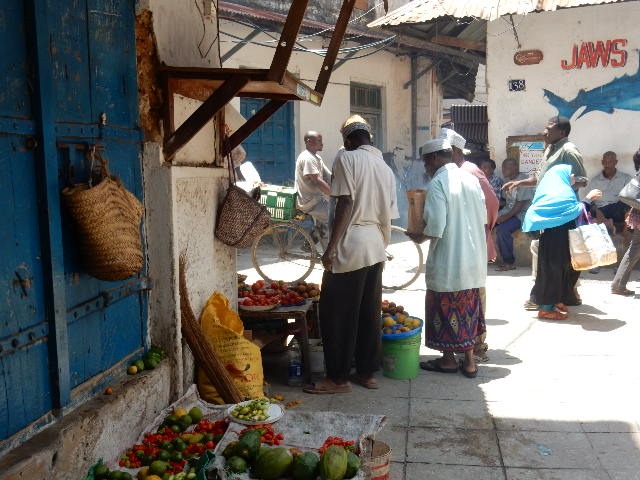 The very name is exotic, as it should be. This group of islands off the east coast of Africa is now part of Tanzania. This, however, was a relatively recent political alignment as the islands had long been under the yoke of foreign powers.

It has been a major regional trading center for more than a millennium—first for the ancient Greeks, and later by Arabs, Indians, all many others. Originally named by the Iranians in the 10th-century, it originally included the entire Swahili coastal area. Muslims first settled the islands when they were looking to escape the tribal wars of the mainland. They began to attract Western powers in the 16th century, when the Portuguese began using it as a source of slaves. Oman then defeated the Portuguese and took control in 1804 and, for a period, even made it the capital of Oman. It became an English protectorate in 1819 (with acquiescence by the Omanis who were retained as Sultans). This arrangement generally lasted well into the 20th century, albeit through a period of intrigues within the Omani ruling family and a brief attempt to overthrow the English which ended with a brief, 45 minute shelling by British warships in 1899 (probably the shortest “war” in history). The occupation all began to end when, after years of unrest, the British withdrew in 1963 and the Sultan was overthrown in 1964 and the island joined with the recently created Tanzania as a means of ensuring its defense.

Although it has had many religious influences, including big missionary pushes by the British and the Germans, it remains over 90 percent Muslim. Its economy, long based on trade, later become a major source and trading center for spices and, most ominously, slaves. While spice growing does remain an important part of the islands’ economy, it is now based overwhelmingly on tourism.

Among the islands primary tourist attractions are its wildlife (especially its tortoises, suni antelope, red colobus monkeys and its brightly colored birds and butterflies), its exotic spices (the islands were the center of the Spice Islands, with their vanilla, nutmeg, and cinnamon plantations), and its beaches and coral reefs (as catered to by a number of resorts).

For centuries, Stone Town had served as a meeting place for the world’s spice merchants, traders and religions. All have left their marks with their architectures, their palaces, their offices, and their churches, cathedrals and mosques. These structures, built primarily in the city’s modern-era 19th-century heyday, are aligned in a complex maze of streets, alleyways and passages. The hand-carved doors of the buildings are themselves worth a tour. The entire city, like its architecture, religions, music and art, is a fusion of its many cultural influences—Arab, African, Indian and Western. It’s no wonder that this is an UNESCO site.

We focused our time in the city around six primary themes. These were its: 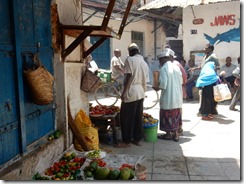 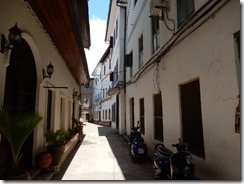 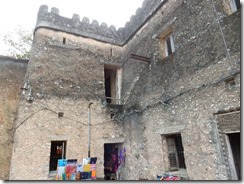 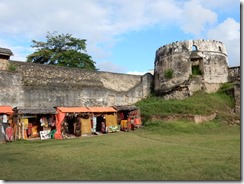 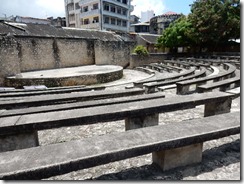 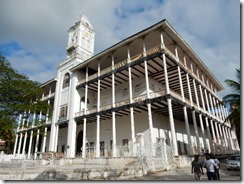 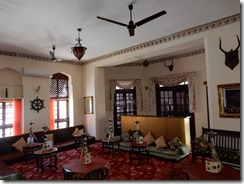 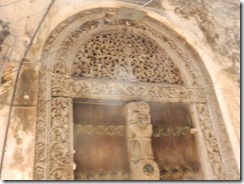 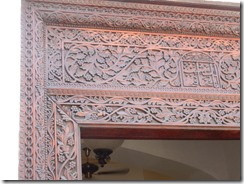 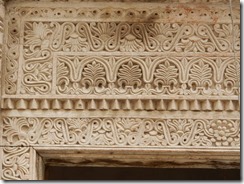 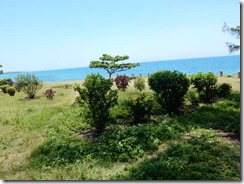 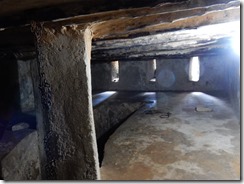 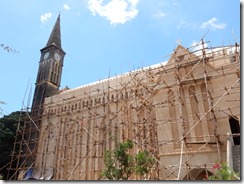 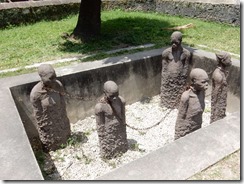 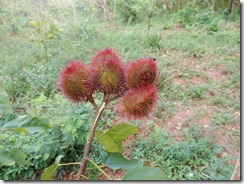 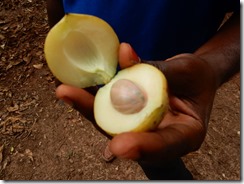 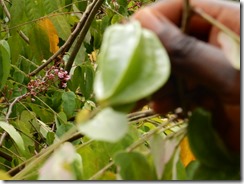 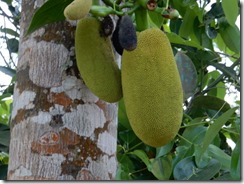 If your time is plentiful, you, along with a good map, guide book and lots of perseverance, can learn much about the city yourself. And if you need help, you’ll find plenty of people who speak English and will help you when you get lost. But if time is short, it may help to take a city tour. Not only is it an easier way to see the sights, but a good guide will also explain the history or the city, provide context for what you are seeing, and enrich your experience by providing facts and examples that you won’t find in guide books. But whether or not you take a tour, absolutely, positively make sure you leave plenty of time to just wander and discover the city’s many hidden treasures.

As usual, we sought out places that gave us a sampling of good local upscale foods.

Emerson Hurumzi offers a four course prix fixe dinner that began with crab Badia with a rather coconut chutney and pita with baba; a different entree for each of us which were red snapper with Harissa and rose and a goat curry, each with pilau rice and green papaya salad; finished off with pistachio and rose water pavlova. The chutney was quite spicy for both of us and the baba ganouh and goat curry were the best, the other dishes were okay, but there was noting to distinguish them. This being said, the Arab-style roof deck was beautiful with great views over the city and sunset. They also had a quartet playing Swahili Coastal music,which was nice background except for the shrill voice of the singer. Overall, its fifth floor rooftop setting probably makes it better for a sunset drink than for dinner. 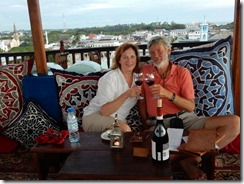 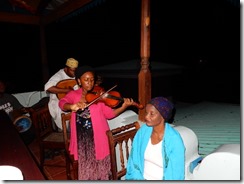 House of Spices, where we had two entrees. First was a grilled kingfish with a spicy sabayon sauce. The second was a mixed seafood grill with cigal (a cross between lobster and a large prawn), calamari, shrimp and crab laws with a sauce that combined a sweet honey tamarind and a slightly spicy Zanzibar curry. Both were good, and a nice combination with their respective sauces. Not a special meal, but good food.

But if you’re looking for nightlife, you had better look early, or look elsewhere. While Mercury’s (from Freddy Mercury of Queen fame) does offer music on weekends, the best you are likely to find most evenings are dinner concerts at upscale restaurants and at the Old Fort. Heck,we tried the Hookah Bar in the Old Dispensary about 9:30 PM one evening. The ground floor was empty and dark. Only after finding and climbing a lit stairway did we manage to find the bar. Although it was open, one employee was sleeping behind the counter.Out on the balcony, overlooking the water, were a group of four musicians, sitting alone, with their instruments at their side, just in case the action should ever pick up. The hookah bars at the the lovely, historic African Club and, to a lesser extend,the Maru Maru Hotel appeared to be more promising, although we weren’t especially in the mood the night we were available to do these.

On the positive side, sunsets are prevalent, especially among bars with views. And they aren’t all that hard to find in a low-rise city with plenty of tourist bars. We did two: one at the Emerson Hurumzi, which has a lot of Arab atmosphere, and one at Maru Maru, a nice, modern roof deck. Although African Club appeared to be a great option (for both a sundowner and a hookah bar), it was just too far from our other evening stops. 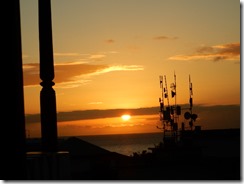 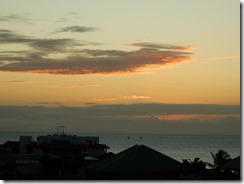 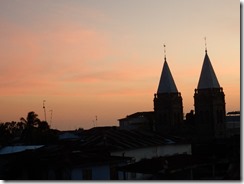 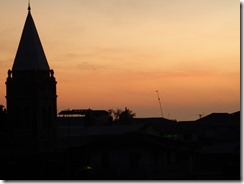 Many of the old palaces have been converted into hotels. Any many more new conversions are on the horizon. We stayed at the Zanzibar Palace Hotel which still retains some of the old-time charm versus being modernized. Like many places in George Town, the staff was very friendly and accommodating. As in other places, however, we did find that although it seemed they understood what we were asking, often the answer did not match the question. Or, they would tell you something that was just wrong. Again,this isn’t the hotel, it was Zanzibar in general.We could never figure out if they wanted to tell you something even if they didn’t know the answer or if they thought they knew the answer but were wrong. Still, they tried hard and always had a smile for you. The bed was quite comfortable, the room clean, the bathtub huge and the air conditioner worked well. Wifi was good in the lobby but didn’t work in one of our bedrooms (we were in 2 different rooms). The location was right in the old section, which was convenient. I might try another place next time only because we prefer a king size bed—which they did not have. 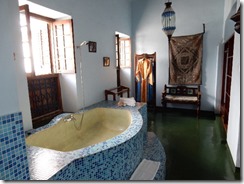 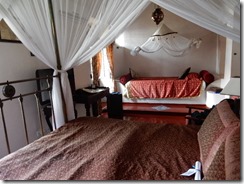